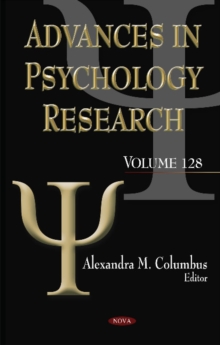 Scholars have suggested that narcissism may be underpinned by feelings of humiliation.

It is possible that grandiosity is a coping strategy aimed at avoiding the painful emotional and mental states associated with feeling inadequate.

Chapter Two examines the potential role of interpersonal problems in the onset and maintenance of PDA as well as the relationship between relational difficulties and cognitive behavioural therapy outcome.

Chapter Three analyses whether family stress moderated the relationship between suffering and functional incapacity and which psychological variables discriminated high versus low incapacity in chronic low back patients receiving chiropractic and physiotherapy treatments.

In Chapter Four, the authors Online social networking is increasingly utilized as a means of finding sexual partners, and those who endorse the highest sexual risk behaviour are more likely to seek partners online.

In Chapter Five, the clinical advantages of using self-hypnosis to initiate and control imaged content that is bidirectionally generated between primary and secondary consciousness is reviewed. And in the final chapter, the authors build on the Cube Model to conceptualise professional competence at various stages of a psychologists career.

Applying this model, we explore best practices in training and education for foundational, functional, and continuing competencies.