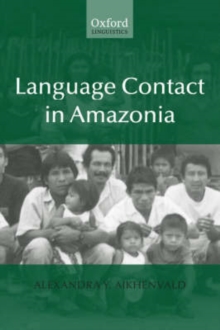 This book considers how forms and meanings of different languages at different times may resemble one another and what the explanation is for this.

The author aims (a) to explain and identify the relationship between areal diffusion and the genetic development of languages, and (b) to discover the means of distinguishing what may cause one language to share the characteristics of another.

This is done using the example of Arawak and Tucanoan languages spoken in thelarge area of the Vaupes river basin in northwest Amazonia, which spans Colombia and Brazil.

In this region language is seen as a badge of identity: language mixing, interaction, and influence are resisted for ideological reasons.

Professor Aikhenvald considers which grammatical categories are mostand which are least likely to be borrowed in a situation of prolonged language contact where lexical borrowing is reduced to a minimum.

She also examines changes brought about by recent contact with European languages and culture, and the linguistic and cultural effects of being part of a group that is aware its language and identity arethreatened.

The book is presented in relatively nontechnical language and will interest linguists and anthropologists.