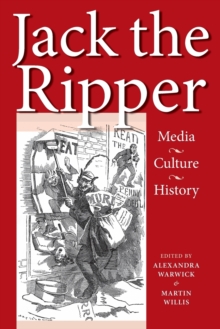 Jack the Ripper: Media, culture, history collects together some of the best academic work on the most important and sensational murder case of the nineteenth century.

Leading scholars in the fields of history, media and cultural studies debate the influence of the Whitechapel Murders on race, gender, the press, fiction, film and the city of London.

This is the first collection of its kind to take the Whitechapel Murders seriously as a vital ingredient in the creation of modern Britain, and the first collection of essays from diverse fields of scholarship to offer academic analysis of the representations and influence of the Whitechapel Murders on both the nineteenth century and the contemporary world.

The collection offers a range of readings of Jack the Ripper organised around the disciplinary topics of media, culture and history.

Jack the Ripper: Media, Culture, History will be of interest to scholars of the Victorian period, particularly to those with interests in nineteenth century media, culture and history. -- .