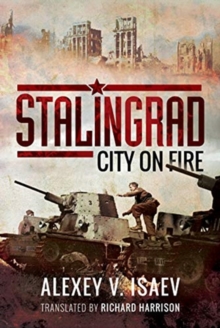 So much has been written about the Battle of Stalingrad - the Soviet victory that turned the tide of the Second World War - that we should know everything about it.

But the history of the war, and the battle, is evolving and is being written anew, and Alexey Isaev's engrossing account is a striking example of this fresh approach. By bringing together previously unpublished Russian archive material - strategic directives and orders, after-action reports and official records of all kinds - with the vivid recollections of soldiers who were there, in the front lines, he reconstructs what happened in extraordinary detail.

The evidence leads him to question common assumptions about the conduct of the battle - about the use of tanks and mechanized forces, for instance, and the combat capability, and tenacity, of the defeated and surrounded German Sixth Army in the last weeks before it surrendered. His gripping narrative carries the reader through the course of the entire battle from the first small-scale encounters on the approaches to Stalingrad in July 1942, through the intense continuous fighting through the city, to the encirclement, the beating back of the relieving force and the capitulation of the Sixth Army in February 1943. Alexey Isaev's latest book is an important contribution to the literature on this decisive battle.

It offers a thought-provoking revised view of events for readers who are already familiar with the story, and it is a fascinating introduction for those who are coming to it for the first time.