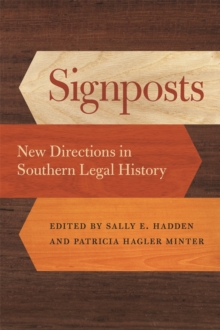 In Signposts, Sally E. Hadden and Patricia Hagler Minter have assembled seventeen essays, by both established and rising scholars, that showcase new directions in southern legal history across a wide range of topics, time periods, and locales. The essays will inspire todays scholars to dig even more deeply into the southern legal heritage, in much the same way that David Bodenhamer and James Elys seminal 1984 work, Ambivalent Legacy, inspired an earlier generation to take up the study of southern legal history.

Contributors to Signposts explore a wide range of subjects related to southern constitutional and legal thought, including real and personal property, civil rights, higher education, gender, secession, reapportionment, prohibition, lynching, legal institutions such as the grand jury, and conflicts between bench and bar. A number of the essayists are concerned with transatlantic connections to southern law and with marginalized groups such as women and native peoples. Taken together, the essays in Signposts show us that understanding how law changes over time is essential to understanding the history of the South.