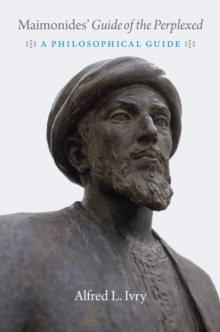 Maimonides' "guide of the Perplexed" : A Philosophical Guide Paperback / softback

A classic of medieval Jewish philosophy, Maimonides's Guide of the Perplexed is as influential as it is difficult and demanding.

Not only does the work contain contrary--even contradictory--statements, but Maimonides deliberately wrote in a guarded and dissembling manner in order to convey different meanings to different readers, with the knowledge that many would resist his bold reformulations of God and his relation to mankind.

As a result, for all the acclaim the Guide has received, comprehension of it has been unattainable to all but a few in every generation. Drawing on a lifetime of study, Alfred L. Ivry has written the definitive guide to the Guide--one that makes it comprehensible and exciting to even those relatively unacquainted with Maimonides' thought, while also offering an original and provocative interpretation that will command the interest of scholars.

Ivry offers a chapter-by-chapter exposition of the widely accepted Shlomo Pines translation of the text along with a clear paraphrase that clarifies the key terms and concepts.

Corresponding analyses take readers more deeply into the text, exploring the philosophical issues it raises, many dealing with metaphysics in both its ontological and epistemic aspects.