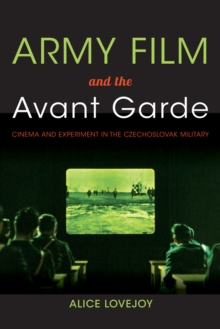 Army Film and the Avant Garde : Cinema and Experiment in the Czechoslovak Military Paperback / softback

During the 1968 Prague Spring and the Soviet-led invasion and occupation that followed, Czechoslovakia's Army Film studio was responsible for some of the most politically subversive and aesthetically innovative films of the period.

Although the studio is remembered primarily as a producer of propaganda and training films, some notable New Wave directors began their careers there, making films that considerably enrich the history of that movement.

By tracing the studio's unique institutional dimensions and production culture, Lovejoy explores the ways in which the "military avant-garde" engaged in dialogue with a range of global film practices and cultures. (The print version of the book includes a DVD featuring 16 short films produced by the Czechoslovak Ministry of Defense.

The additional media files are not available on the eBook.)