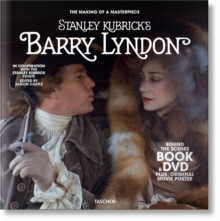 Based on William Makepeace Thackeray's picaresque novel of 1844, Barry Lyndon tells the story of a social-climbing opportunist (Ryan O'Neal) who succeeds in marrying a beautiful aristocrat far above his social station (Marisa Berenson), only to see his gains eventually undone by avarice and spite.

Meticulously conceived and sumptuously photographed-using a specially-modified lens and almost exclusively lit by candles and natural light-Barry Lyndon is at once a satirical and sympathetic portrayal of a strangely endearing antihero. (Because "he has charm and courage," said Kubrick, "it's impossible not to like him despite his vanity, his insensitivity, and his weakness.")Despite underwhelming audiences and critics alike when it was released in 1975, a time when period pieces were not all the rage, Barry Lyndon has quietly risen in the ranks of Kubrick's canon and is now widely considered to be not only among his finest achievements but a cinematic masterpiece without equal.

This collection is part of the Making of a Masterpiece series, offering a behind-the-scene glimpse into movie milestones.This set includes:film stills, behind-the-scenes photographs, screenplay drafts, and other exclusive material from Stanley Kubrick's archivesbackground about the making of the film, interviews with Kubrick, and an illustrated biography and filmographya fold-out film postera DVD of the remastered film