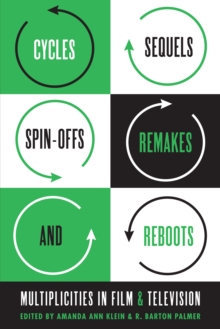 With sequels, prequels, remakes, spin-offs, or copies of successful films or franchises dominating film and television production, it sometimes seems as if Hollywood is incapable of making an original film or TV show.

These textual pluralities or multiplicities-while loved by fans who flock to them in droves-tend to be dismissed by critics and scholars as markers of the death of high culture.

Cycles, Sequels, Spin-offs, Remakes, and Reboots takes the opposite view, surveying a wide range of international media multiplicities for the first time to elucidate their importance for audiences, industrial practices, and popular culture. The essays in this volume offer a broad picture of the ways in which cinema and television have used multiplicities to streamline the production process, and to capitalize on and exploit viewer interest in previously successful and/or sensational story properties.

An impressive lineup of established and emerging scholars talk seriously about forms of multiplicity that are rarely discussed as such, including direct-to-DVD films made in Nigeria, cross-cultural Japanese horror remakes, YouTube fan-generated trailer mash-ups, and 1970s animal revenge films.

They show how considering the particular bonds that tie texts to one another allows us to understand more about the audiences for these texts and why they crave a version of the same story (or character or subject) over and over again.

These findings demonstrate that, far from being lowbrow art, multiplicities are actually doing important cultural work that is very worthy of serious study.