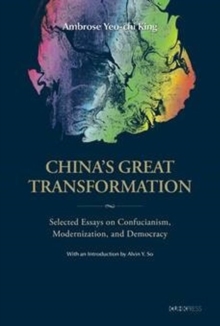 Ambrose Yeo-chi King has been a pioneer since the mid-1960s theorising China's modernisation process.

China's Great Transformation: Selected Essays on Confucianism, Modernization, and Democracy is a collection of his papers published between 1975 and 1997.

These two decades are turning points for China as we observed the following dramatic historical trends-the shift from revolutionary Maoism to Four Modernizations in mainland China, the unexpected democratic transition in Taiwan, and the rise of four little dragons (Hong Kong, Taiwan, South Korea, and Singapore) in East Asia.

Focusing on the cultural dimension, King's essays in this volume are aimed to understand, to interpret, or to explain all these new developments from a historical, comparative framework. King obviously is a culturalist and a scholar in the modernisation camp, but he at the same time voices many sharp criticisms on the modernisation theory and offers a fresh reinterpretation of Confucian culture.

He emphasises the role of culture in societal transformation, but he never takes culture for granted, and examines it as a dynamic historical process always subject to change and embedded in political economy and social institutions.