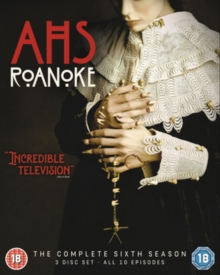 All ten episodes from the sixth season of the American horror anthology.

Filmed as a documentary titled 'My Roanoke Nightmare', the story follows Matt and Shelby Miller (André Holland and Lily Rabe) who, after moving to North Carolina, recall their experiences with the paranormal.

Played by actors Dominic Banks (Cuba Gooding Jr.) and Audrey Tindall (Sarah Paulson), the documentary reconstruction shows the couple as they try to settle in to their new home but are disturbed by unexplainable occurrences.