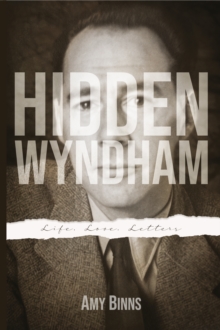 Until now, little was known of John Wyndham. Despite his popularity, his obsessive need for privacy led to him being known as "the invisible man of science fiction". He redefined the genre with dystopian classics The Day of the Triffids and The Midwich Cuckoos.

In Hidden Wyndham, Amy Binns reveals the woman who was the inspiration for his strong-minded heroines.

Their secret love affair sustained this gentle and desperately shy man through failure, war, and, ultimately, success. Hidden Wyndham shows how Wyndham's own disturbing war experiences - witnessing the destruction of London in the Blitz then as part of the invading British army in France and Germany - inspired and underlay his dystopian masterpieces. It provides an insight into the lives of men and women who refused to live by the oppressive rules of society in the mid-20th century.

Many extracts from his letters are included, along with his own photographs. "Put your hand on your heart sometimes, my lovely, and tell yourself that it is mine.

An era had shut up its houses and gone away, perhaps forever.

But we had that little much longer. How cruel the macrocosm, sweet, but how sweet the microcosm.