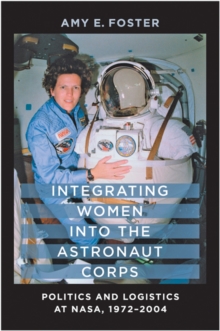 Integrating Women into the Astronaut Corps : Politics and Logistics at NASA, 1972-2004 Hardback

In answering this question, Foster recounts the complicated history of integrating women into NASA's astronaut corps.

Foster examines the political, technological, and cultural challenges that the agency had to overcome to usher in this new era in spaceflight.

She shows how NASA had long developed progressive hiring policies but was limited in executing them by a national agenda to beat the Soviets to the moon, budget constraints, and cultural ideas about women's roles in America.

Through extensive archival research, Foster also examines NASA's directives about sexual discrimination, the technological issues in integrating women into the corps, and the popular media's discussion of women in space. Foster puts together a truly original study of the experiences not only of early women astronauts but also of the managers and engineers who helped launch them into space. In documenting these events, Foster offers a broader understanding of the difficulties in sexually integrating any workplace, even when the organization approaches the situation with as positive an outlook and as strong a motivation as did NASA.