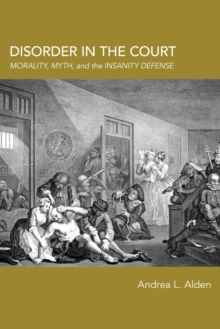 Disorder in the Court : Morality, Myth, and the Insanity Defense Paperback / softback

Part of the Rhetoric, Law, and the Humanities series

The first book-length rhetorical history and analysis of the insanity defense. The insanity defense is considered one of the most controversial, most misunderstood, and least straightforward subjects in the American legal system.

Disorder in the Court: Morality, Myth, and the Insanity Defense traces the US legal standards for the insanity defense as they have evolved from 1843, when they were first codified in England, to 1984, when the US government attempted to revise them through the Insanity Defense Reform Act.

Throughout this period 'insanity' existed primarily as a legal term rather than a medical one; yet the testimony of psychiatric experts is required in cases in which an insanity defense is raised. The adjudication of such cases by courtroom practice is caught between two different but overlapping discourses, the legal and the medical, both of which have historically sought to assert and maintain firm disciplinary boundaries.

The legal concept of what constitutes insanity and, therefore, an abdication of responsibility for one's actions does not map neatly onto the mental health professions' understandings of mental illness and how that affects an individual's ability to understand or control his or her actions.

Additionally, there are multiple layers of persuasion involved in any effort to convince a judge, jury - or a public, for that matter - that a defendant is or is not responsible for his or her actions at a particular moment in time. Alden examines landmark court cases such as the trial of Daniel McNaughtan, Durham v.

United States, and the trial of John Hinckley Jr. that signal the major shifts in the legal definitions of the insanity defense.

She contextualizes these analyses through popular texts - for example, newspaper articles and editorials - showing that while all societies have maintained some version of mental illness as a mitigating factor in their penal systems, the insanity defense has always been fraught with controversy. 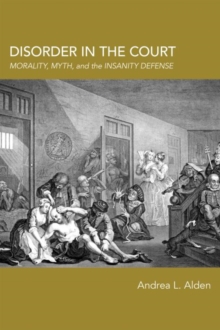 Disorder in the Court