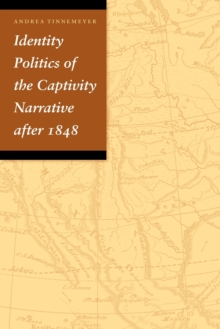 Identity Politics of the Captivity Narrative after 1848 Paperback / softback

Andrea Tinnemeyer's book examines the nineteenth-century captivity narrative as a dynamic, complex genre that provided an ample medium for cultural critique, a revision of race relations, and a means of elucidating the U.S.-Mexican War's complex and often contradictory significance in the national imagination.

The captivity narrative, as Tinnemeyer shows, addressed questions arising from the incorporation of residents in the newly annexed territory.

This genre transformed its heroine from the quintessential white virgin into the Mexican maiden in order to quell anxieties over miscegenation, condone acts furthering Manifest Density, or otherwise romanticize the land-grabbing nature of the war and of the opportunists who traveled to the Southwest after 1848.

Some of these narratives condone and even welcome interracial marriages between Mexican women and Anglo-American men. By understanding marriage for love as an expression of free will or as a declaration of independence, texts containing interracial marriages or romanticizing the U.S.-Mexican War could politicize the nuptials and present the Anglo-American husband as a hero and rescuer.

This romanticizing of annexation and cross-border marriages tended to feminize Mexico, making the country appear captive and in need of American rescue and influencing the understanding of "foreign" and "domestic" by relocating geographic and racial boundaries. In addition to examining more conventional notions of captivity, Tinnemeyer's book uses war song lyrics and legal cases to argue that "captivity" is a multivalenced term encompassing desire, identity formation, and variable definitions of citizenship.