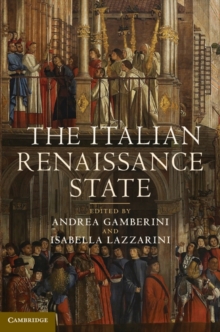 This magisterial study proposes a revised and innovative view of the political history of Renaissance Italy.

Drawing on comparative examples from across the peninsula and the kingdoms of Sicily, Sardinia and Corsica, an international team of leading scholars highlights the complexity and variety of the Italian world from the fourteenth to early sixteenth centuries, surveying the mosaic of kingdoms, principalities, signorie and republics against a backdrop of wider political themes common to all types of state in the period.

The authors address the contentious problem of the apparent weakness of the Italian Renaissance political system.

By repositioning the Renaissance as a political, rather than simply an artistic and cultural phenomenon, they identify the period as a pivotal moment in the history of the state, in which political languages, practices and tools, together with political and governmental institutions, became vital to the evolution of a modern European political identity.