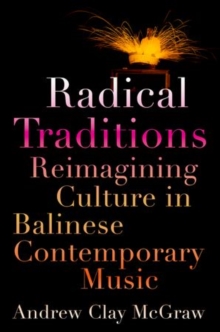 For the modern West, Bali has long served as an icon of exotic pre-modern innocence.

Yet the reality of modern Bali stands in stark contrast to this prevailing and enduring image, a contrast embodied by a movement of local musical experimentation, musik kontemporer, which emerged in the 1970s and which still thrives today.

In Radical Traditions, author Andrew Clay McGraw shows how music kontemporer embodies the tensions between culture as represented andlived, between the idea of Balinese culture and the experience of living it.

As the first English language monograph on this important Indonesian musical genre, Radical Traditions is an essential resource for anyone fascinated by modern Indonesian and Balinese music and culture.