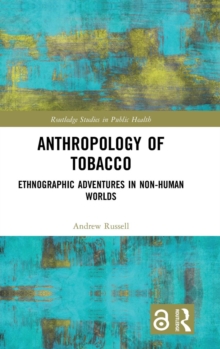 Tobacco has become one of the most widely used and traded commoditites on the planet.

Reflecting contemporary anthropological interest in material culture studies, Anthropology of Tobacco makes the plant the centre of its own contentious, global story in which, instead of a passive commodity, tobacco becomes a powerful player in a global adventure involving people, corporations and public health.

Bringing together a range of perspectives from the social and natural sciences as well as the arts and humanities, Anthropology of Tobacco weaves stories together from a range of historical, cross-cultural and literary sources and empirical research.

These combine with contemporary anthropological theories of agency and cross-species relationships to offer fresh perspectives on how an apparently humble plant has progressed to world domination, and the consequences of it having done so.

It also considers what needs to happen if, as some public health advocates would have it, we are seriously to imagine 'a world without tobacco'.

This book presents students, scholars and practitioners in anthropology, public health and social policy with unique and multiple perspectives on tobacco-human relations.