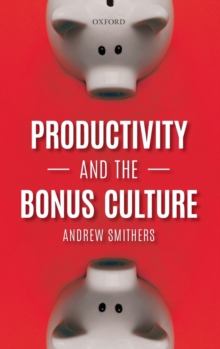 Productivity and the Bonus Culture Hardback

Living standards in the UK and US are in danger of falling.

A decline in growth due to poor productivity and an unfavourable change in demography has weakened the stand of liberal democracy, and voter dissatisfaction is encouraging populist policies that threaten even worse outcomes.

Whilst living standards once grew faster than productivity they now grow more slowly, and the working population is no longer growing faster than the population as a whole.

To avoidfalling living standards the productivity problem must be addressed. Andrew Smithers argues that faster productivity does not depend, as many suggest, on technology; it also relies on investment.

Current growth theory is based on a faulty model which has induced pessimism about our ability to encourage more growth.

Productivity and the Bonus Culture sets out a revised model which demonstrates that weakness in productivity is the result of the bonus culture, and suggests ways to change this flawed system so that investment is encouraged and growthreturns.