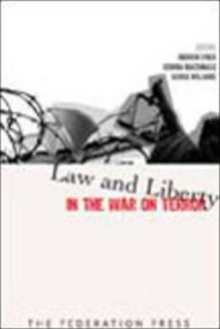 Law and Liberty in the War on Terror Paperback / softback

Law and Liberty in the War on Terror brings together a collection of diverse views on the major questions and issues governing our response to the threat of terrorism and the impact which our attempts to protect the community may have on our law and politics.

Through essays by leading international and domestic commentators drawn from across politics, government, the academy and media, the book offers a range of critical perspectives on the challenge of ensuring national security whilst preserving the liberties that define our society.

It commences with a preface by Sir Gerard Brennan, former Chief Justice of Australia and consists of seven parts within which contributors address questions such as the difficulty of defining 'terrorism'; the extent to which the criminal justice system can accommodate terrorism offences; the acceptability of torture as an interrogative method; the role of the judiciary in times of emergency; how Australia's laws compare with those of the United Kingdom and New Zealand; and how our communities and politics are affected by responses to terrorism.

Its chapters are strongly reflective of the current debates about Australia's anti-terrorism laws and are written so as to be accessible to a general informed audience.

The book would also provide an excellent resource for law and politics students working in the area.

Law and Liberty in the War on Terror will be thoroughly up to date and include discussion of the recent handling of terrorism allegations against Dr Mohamed Haneef and also the High Court of Australia's upholding of the control order over Jack Thomas.

It is an indispensable book for all Australians who want to know more about our anti-terrorism laws and their wider significance for our society.