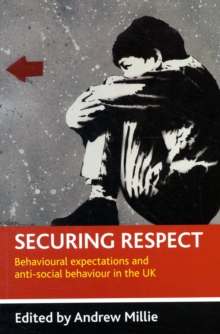 Over recent years, the Government focus on anti-social behaviour has been replaced by a focus on respect.

Tony Blair's 'Respect Action Plan' was launched in January 2006, Gordon Brown has spoken of "duty, responsibility, and respect for others", and the Conservatives have launched their 'Real Respect Agenda'.

Within government, the respect agenda has a cross-departmental influence, but like anti-social behaviour before it, 'respect' has not yet been tightly defined. And what is it about the contemporary UK that sees respect as lacking, that in order to tackle anti-social behaviour we first need to 'secure respect'?Until now, there has been little attention in the academic and policy literature on the Government's push for respect. "Securing respect" contains ten essays from leading academics in the field that consider the origins, current interpretations and possible future for the Respect Agenda.

The book follows the five key themes of: respect in context; young people and children; communities and families; city living; and issues of identity and values. "Securing respect" is inter-disciplinary, linking theory and practice, and will be of value to practitioners, academics and students with interests in criminology, socio-legal studies, social policy, urban geography, housing, social history, sociology and landscape.