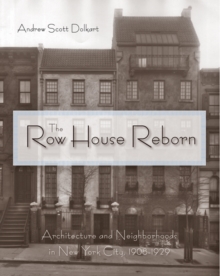 This fascinating study is the first to examine the transformation of residential architecture in New York City in the early 20th century.

In the decades just before and after World War I, a group of architects, homeowners, and developers pioneered innovative and affordable housing alternatives.

They converted the deteriorated and bleak row houses of old New York neighborhoods into modern and stylish dwellings.

Designers transformed utilitarian backyards into gardens inspired by the Italian Renaissance and rearranged interior plans so that major rooms focused on the new landscapes.

This movement-an early example of what has become known as "gentrification"-dramatically changed the physical character of these neighborhoods.

It also profoundly altered their social makeup as change priced poor and largely immigrant households out of the area. Dolkart traces this aesthetic movement from its inception in 1908 with architect Frederick Sterner's complete redesign of his home near Gramercy Park to a wave of projects for the wealthy on the East Side to the faux artist's studios for young professionals in Greenwich Village.

Dolkart began his study because the work of these architects was being demolished.

His extensive research in city records and contemporary sources, such as newspapers and trade and popular magazines, unearths a wealth of information detailing the transformation of New York's residential neighborhoods. This significant development in the history of housing and neighborhoods in New York has never before been investigated. The Row House Reborn will interest architectural and urban historians, as well as general readers curious about New York City architecture and neighborhood development.