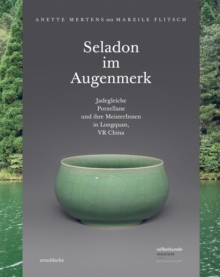 Ever since at least the ninth century, the Chinese province of Zhejiang has been known for its fine celadon porcelain with wonderful shimmering surfaces in qing, the magnificent shades of green.

Chinese celadon enjoyed its golden age from the eleventh to the fourteenth century, a time when it found its way into the Imperial collections and was exported worldwide.

A decline of craftsmanship followed, and by the end of the nineteenth century celadon had almost completely disappeared. It was not until the 1950s that this style of pottery was successfully brought back to life.

In the 1990s changes to the market economy forced porcelain artisans to reorient; to this day they have been able to successfully align themselves, similar to the UNESCO World Cultural Heritage system, as 'Living State Treasures' with their unparalleled celadon glazes.

Seladon im Augenmerk offers an exciting social anthropological insight into the cultural history, technology and sociality of celadon production in the porcelain metropolis of Longquan, PR, China, up to the present day. Text in German.