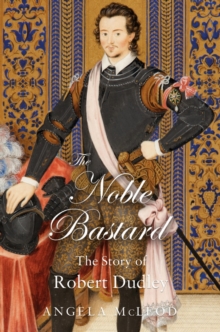 "The Noble Bastard" : The Story of Robert Dudley Paperback / softback

This book tells the story of a little-known but outstanding man whose achievements far eclipsed those of his famous father, Queen Elizabeth's favourite, the Earl of Leicester.

Unlike similar works, it is a biographical novel, not a biography.

Robert Dudley's legitimacy remains in doubt to this day though it was recognised by Charles I, Charles II, The Austrian Emperor and the Pope.

Here his life has been extensively researched and the man speaks for himself through historical fact.

His achievements, for his era and position, were varied and unique and he died, the Duke of Northumberland, in what is now the Villa Castello near Florence. Perhaps because he left his own country when Star Chamber closed his legitimacy case, he has not been given his proper place in English history.

He did not go alone; his beautiful cousin Elizabeth Southwell, disguised as his page, went with him and their twelve children were born in Tuscany.

His powerful personality shouts through his actions.

Anyone who enjoys Elizabethan and Jacobean history will appreciate the story of this gifted buccaneer of a man who built four ships and sailed them to Trinidad, fought as an Admiral at Cadiz and took possession of Kenilworth Castle by the age of twenty-two.

Later, while serving the Medici rulers of Tuscany as Great Chamberlain and rebuilding their navy, he wrote and left to posterity, a definitive, six-volume work on all naval and sea-faring matters, "Dell' Arcano Del Mare" copies of which remain.