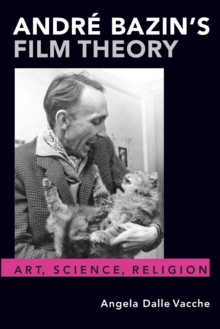 Through metaphors and allusions to art, science, and religion, Andre Bazin's writings on the cinema explore a simple yet profound question: what is a human?

For the famous French film critic, a human is simultaneously a rational animal and an irrational being.

Bazin's idea of the cinema is a mind-machine where the ethical implications have priority over aesthetic issues. And in its ability to function as an art form for the masses, cinema is the only medium thatcan address an audience at the individual and community levels simultaneously- the audience sees the same film, but each individual relates to the narrative in a different way. In principle, cinema can unsettle our routines in productive ways and expand our sense of belonging to a much larger picture. By arguing that this dissident Catholic's worldview is anti-anthropocentric, Angela Dalle Vacche concludes that Andre Bazin's idea of the cinema recapitulates the histories of biological evolution and modern technology inside our consciousness.

Through the projection of recorded traces of the world onto a brain-like screen, the cinema can open viewers up to self-interrogation and empathy towards Otherness.

Bazin was neither a spiritualist nor an animist or a pantheist, yet his film theoryleads also to ideas of a more cosmological persuasion: through editing and camera movement, cinema explores our belonging to a vast universe that extends from the microbes of the microscope to the stars of the telescope.

Such ideas of connectedness, coupled with Bazin's well-known emphasis of realism,form the foundation for his film theory's embrace of Italian neorealism.

Choosing to avoid a quantitative naturalism based on accumulation of details, Bazin's theory instead promotes the kind of cinema that celebrates perceptual displacement, the objectification of human behavior, and one's own critical self-awareness.