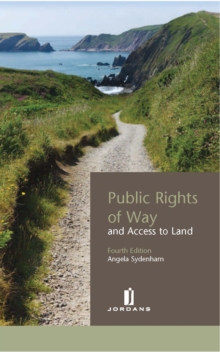 Public Rights of Way and Access to Land Paperback / softback

Public Rights of Way and Access to Land, written by Angela Sydenham, one of the country's leading authorities on the subject, succeeds in clarifying the arcane and often archaic law.

By turn she explains the creation and loss of public rights of way and access to land, how their existence can be ascertained, and the nature of the obligations to maintain and manage them.

The fourth edition of this popular work has been comprehensively updated to take account of recent developments including: * the Marine Act 2009 Part 9 introducing Coastal Access * the coming into force of many more sections of the CROW Act 2000 * numerous new regulations including the Public Rights of Way (Hearings and Inquiry Procedure) (England) Rules 2007/2008 * the Godmanchester case, which has been reversed by the House of Lords * the Redcar case [2009] EWCA Civ 3, which has added an important additional requirement for user as of right * new cases on restricted byways: the Winchester case [2008] EWCA Civ 431 and Maroudes [2009] EWHC 62 * a major case on adverse possession and public rights of way: R (Smith) v Land Registry Peterborough) [2009] EWHC 328 * an important case on stopping up under s118B of the Highways Act 1980.

R (on the application of) Manchester City Council v Sec of State [2007] EWHC 3167 * recent cases on animals on public rights of way: Mckenny v Foster EWCA Civ 173 and McKaskie v Cameron (2009), as well as consultation on amendments to the Animals Act 1971 The new edition sets out the Countryside and Public Rights of Way Act 2000 in full with annotations to indicate when the various sections commenced and any regulations made under those sections, together with all relevant provisions from the Marine Act 2009, the Highways Act 1980, the Wildlife and Countryside Act 1981 and the Natural Environment and Rural Communities Act 2006, as well as other relevant planning notes and guidance. 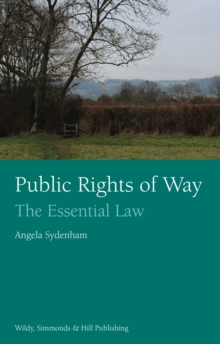