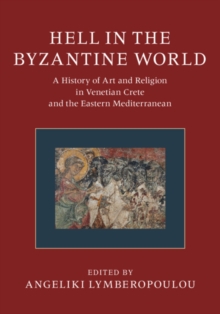 Hell in the Byzantine World 2 Volume Hardback Set : A History of Art and Religion in Venetian Crete and the Eastern Mediterranean Mixed media product

The imagery of Hell, the Christian account of the permanent destinations of the human soul after death, has fascinated people over the centuries since the emergence of the Christian faith.

These landmark volumes provide the first large-scale investigation of this imagery found across the Byzantine and post-Byzantine world.

Particular emphasis is placed on images from churches across Venetian Crete, which are comprehensively collected and published for the first time.

Crete was at the centre of artistic production in the late Byzantine world and beyond and its imagery was highly influential on traditions in other regions.

The large amount of data presented in this publication highlight Hell's emergence in monumental painting not as a concrete array of images, but as a diversified mirroring of social perceptions of sin.