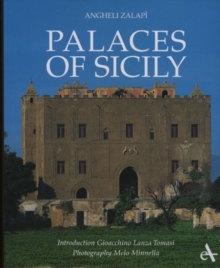 This book is the first to trace the evolution and style of the fabulous homes that have been bulit on the island, from feudal castles to city mansions and country villas.

It begins in the heyday of the Altavillas, the dynasty of Norman rulers who arrived in Sicily midway through the eleventh-century.

They were open to the rich cultural influences of the island, especially the Arab koine that melded so successfully into buildings such as the Palazzo dei Normanni (Royal Palace) and Palazzo Zisa.

In this period extraordinary buildings, such as Palazzo Ajatamicristo, were constructed.

At the height of the Baroque period, Sicily became a hotbed of orignal architectural and decorative elements.

During the rebuilding that followed the terrible earthquake of 1683, eastern Sicily gave birth to a whole new artistic vocabulary.

In this context, suffice it to mention Palazzo Biscari in Catania.

But Palermo was not to be outdone and sumptuous private mansions sprang up.

The most notable of these was Palazzo Valguarnera-Gangi. In the eighteenth-century, taking holidays in the countryside just outside town became fashionable and buildings such as the magnificent Villa Laguarnera and the extravagant Villa Palagonia reached an architectural zenith.