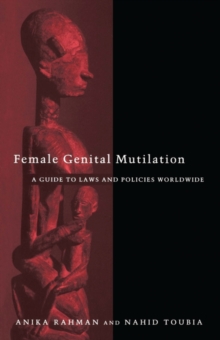 This is the most extensive report currently available on the use of law and policy to address the practice of female circumcision/female genital mutilation (FC/FGM).

In encouraging a proactive governmental response to the practice, the book places it firmly in a human rights and legal framework.

The result of a major research report in 41 countries, both North and South, it covers not only the prevalence of FC/FGM but the various laws and other measures in place to prevent it. The book describes FC/FGM, its history, its consequences for health and the movement now working to combat it.

It then reports on each country - its prevalence and governmental measures for its eradication. FC/FGM is not exclusively a concern of African governments.

Countries of the North have also adopted legal measures aimed at preventing the practice.

These measures, however, are clearly directed at their immigrant populations.

This throws up a classic dilemma of human rights work: whether or not to fight for rights that are seen as universal and fundamental - in this case the bodily integrity of women - when it means overriding the cultural beliefs of individuals, or minority groups. Finding a solution to this problem is the second aim of this book.

The authors suggest an answer through the actual implementation of human rights treaties.

They look at how FC/FGM violates these rights for women: specifically freedom from gender discrimination and violence, the right to health and the rights of children. The last section of the book makes recommendations for action by governments, the international community, and non-governmental organizations.