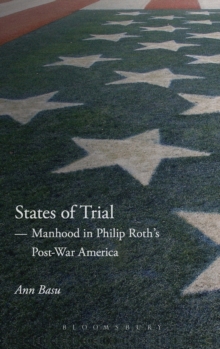 This study of five towering Philip Roth novels - Operation Shylock, the American Pastoral trilogy, and The Plot Against America - explores his vision of a turbulent post-war America personified in trial-racked Jewish American men.

These works collectively register the impact of post-1945 upheavals upon the nation and American trial-based myths about wholesomeness and regeneration.

Roth shows how the "stories of old" which moulded American self-making have produced disorderly and disruptive counter-stories, playing themselves out in Jewish men marked by spots and stains where their constitutional integrity has been infringed. Roth probes the nation's own constitutional testing points as he shatters the identities of characters such as fallen ace athlete Swede Levov and disgraced academic Coleman Silk.

His books seek to strip away America's false innocence, demanding that historical accountability should replace myths of new beginnings.

Creating arenas of trial for his American men where national discourses and narratives cross and clash, Roth's novels reveal that a culture equals its debates and allow us to see Americans and America as ongoing experiments, always being tested.