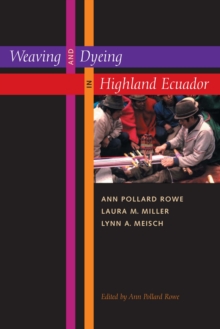 Although less well known than its much-admired counterparts in Peru and Bolivia, highland Ecuadorian weaving is an Andean tradition that has relationships with these more southern areas.

A world away from the industrialized textile manufacturing of Euro-American society, these handmade pieces reflect the history and artistry of an ancient culture. This comprehensive study, edited by Ann Pollard Rowe, is unrivaled in its detail and includes not only descriptions of the indigenous weaving and dyeing technology, but also an interpretation of its historical significance, as well as hundreds of photographs, drawings, and maps that inform the understanding of the process. The principal focus is on backstrap-loom weaving, a major pre-Hispanic technology.

Ecuadorian backstrap looms, which differ in various ways from those found elsewhere in the Andes, have previously only been treated in general terms.

Here, the basic operation of this style of loom is covered, as are a variety of patterning techniques including warp-resist (ikat) dyeing, weaving belts with twill, and supplementary- and complementary-warp patterning.

The weaving techniques are explained in detail, so the reader can replicate them if desired. Textiles have been an important art form among Andean peoples from remote prehistory up to the present.

A greater understanding of their creation process can yield a more meaningful appreciation of the art itself. 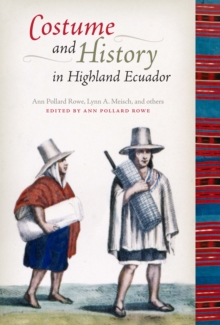 Costume and History in Highland Ecuador