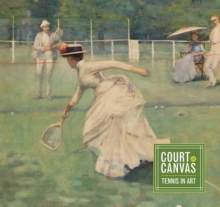 "Court on Canvas: Tennis in Art" celebrates the origins of the game in Birmingham and explores the ways in which tennis has inspired artists from the mid-nineteenth century onwards.

The book guides us from the origins of the game as a genteel pastime for the upper classes, through its codification as a sport, to the international high-earning power game of today.

It illustrates the changes in fashion associated with the sport and the important role tennis played in the emancipation of women in the early part of the twentieth century.

The book contains a survey of images of tennis in art from the 1870s onwards, and detailed examinations of the works are placed in a wider social, historical and art historical context.