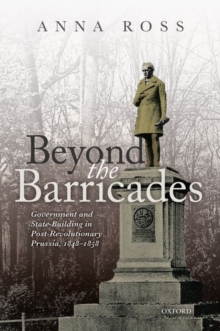 Beyond the Barricades : Government and State-Building in Post-Revolutionary Prussia, 1848-1858 Hardback

Beyond the Barricades is an original study of government after the 1848 revolutions.

It focuses on the state of Prussia, where a number of conservative ministers sought to learn lessons from their experiences of upheaval and introduce a wave of reform in the 1850s.

Reform strengthened contact with the Prussian population, making this a classic episode of state-building, but Beyond the Barricades seeks to go further.

It makes a case for taking notice of government activity at this particular juncture because the measures endorsed by conservativestatesmen in the 1850s sought to remove the feudal intermediaries that had lingered long into the nineteenth century and replace them with an array of government institutions, legal regimes, and official practices.

In sum, this book recasts the post-revolutionary decade as a period which saw the transition from an old to a new world, pivotal to the making of modern Prussia and ultimately, modern Germany.