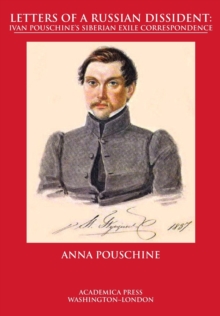 The Russian nobleman Ivan Ivanovich Pouschine is most recognized for two achievements: his leadership role in the 1825 Decembrist uprising agains Russia's tsarist government and his set of poignant memoirs about his dear friend Alexander Pushkin.

Pouschine's historical and cultural significance, although often subtle, extends much further, however.

After graduating from Tsar Alexander I's new Lyceum in 1817, Pouschine spent several years in the military and government service, serving as an officer and judge.

All the while, he was an active leader of various secret societies in both St.

Petersburg and Moscow that discussed the viability of a democratic government for Russia.

He went on to become a key organizer of the resulting 1825 Decembrist uprising, for which he was sentenced to thirty years of harsh exile in Siberia.

In exile, Pouschine involved himself in a variety of self-motivated pursuits: leading efforts to improve intellectual discourse in remote Siberia; managing the Decembrists' cooperative, and serving as the center of the exiles' social circle.

In this book, Princeton scholar Anna Pouschine will explore her ancestor's correspondence by examining how his letters created personal fulfillment in a desolate environment at a difficult moment in his country's storied past.