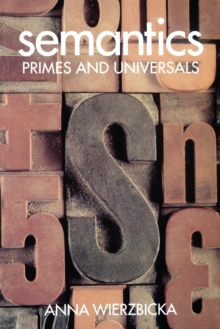 Conceptual primitives and semantic universals are the cornerstones of a semantic theory which Anna Wierzbicka has been developing for many years. Semantics: Primes and Universals is a major synthesis of her work, presenting a full and systematic exposition of that theory in a non-technical and readable way. It delineates a full set of universal concepts, as they have emerged from large-scale investigations across a wide range of languages undertaken by theauthor and her colleagues. On the basis of empirical cross-linguistic studies it vindicates the old notion of the 'psychic unity of mankind', while at the same time offering a framework for the rigorous description of different languages and cultures.