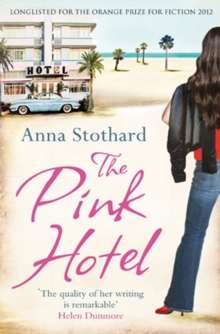 Longlisted for the Orange Fiction Prize 2012A seventeen-year-old London girl flies to Los Angeles for the funeral of her mother Lily, from whom she was separated in her childhood.

After stealing a suitcase of letters, clothes and photographs from her mum's bedroom at the top of a hotel on Venice Beach, the girl spends her summer travelling around Los Angeles in a bid to track down the men who knew her mother.

As she discovers more about Lily's past and tries to re-enact her life, she comes to question the foundations of her own personality. The Pink Hotel, Anna Stothard's stunning second novel after the critical and commercial success of Isabel and Rocco, is a tale about finding love in the most unlikely of places, and how sometimes you can only know who you are by discovering who you are not.