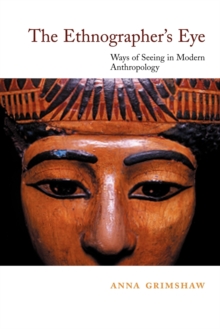 The Ethnographer's Eye : Ways of Seeing in Anthropology Paperback / softback

by Anna (University of Manchester) Grimshaw

Grimshaw's exploration of the role of vision within modern anthropology engages with current debates about ocularcentism, investigating the relationship between vision and knowledge in ethnographic enquiry.

Using John Berger's notion of 'ways of seeing', the author argues that vision operates differently as a technique and theory of knowledge within the discipline.

In the first part of the book she examines contrasting visions at work in the so-called classical British school, reassessing the legacy of Rivers, Malinowski and Radcliffe-Brown through the lens of early modern art and cinema.

In the second part of the book, the changing relationship between vision and knowledge is explored through the anthropology of Jean Rouch, David and Judith MacDougall, and Melissa Llewelyn-Davies.

Vision is foregrounded in the work of these contemporary ethnographers, focusing more general questions about technique and epistemology whether image-based media are used or not in ethnographic enquiry.