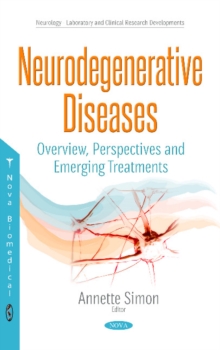 Neurodegenerative diseases are widespread disorders, with prevalence increasing with age.

The first chapter of this book discusses autophagy, a cellular tool for the elimination of proteins that accumulate in neurodegenerative disorders and have pathogenetic significance.

Parkinsons disease (PD) is one of the most common degenerative diseases of the central nervous system.

Chapter Two examines evidence on impairment of social cognition in patients with PD.

Chapter Three discusses how finding the molecular cause of the PD could contribute to early diagnosis, and facilitate the development of effective neuroprotective or modulatory drugs.

The final chapter reviews the functional role of adult hippocampal neurogenesis in learning and memory, and how this form of structural plasticity is altered in neurodegenerative diseases known to involve cognitive impairment such as Alzheimers disease, Parkinsons disease, and Huntingtons disease.