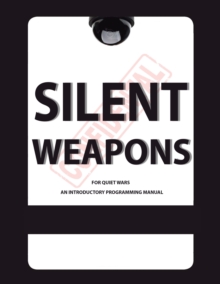 This is the top secret manual said to be found by accident in 1986 by an employee of Boeing Aircraft. He bought a surplus IBM copier for scrap parts at a government sale and found the manual inside. The manual outlines a plan to control the masses through manipulation of industry, education and politics, and to divert the public's attention from what is really going on. Surprisingly, it is claimed that much of what is outlined has come to pass, and makes interesting reading for those exploring the deeper levels of our social structure and how it may be controlled or influenced. This edition includes all of the important charts and diagrams not seen in other versions. It is an exact replica of the original, aside from some minor alterations to correct print quality. Found in this edition only is a new, four-page Introduction. It explains why we may never be certain of the true origin of this document, despite the fact that someone has stepped forward and claimed that they assembled it from multiple sources.