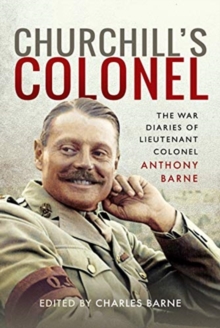 Anthony Barne started his diary in August 1939 as a young, recently-married captain in the Royal Dragoons stationed in Palestine.

He wrote an entry for every day of the war, often with great difficulty, sometimes when dog-tired or under fire, and sometimes when things looked black and desperate, but more often in sunshine and optimism, surrounded by good fellows who kept one cheerful and helped one through the sad and difficult times'.

His diary ends in July 1945, by which time he was commanding officer of the 4th Hussars, having recently visited Downing Street for lunch alone with the Churchills. The diaries have an enormous scope covering time in Palestine and Egypt before he joins the Eighth Army, describing the retreat back to El Alamein, the battle and its aftermath.

He ends the campaign commanding his regiment. He often graphically details the physical realities of war: the appalling conditions in the desert, the bombardments of the regiment from the air, the deaths and serious injuries of fellow soldiers.

In 1943, he flies down to Rhodesia to see his wife and infant son before returning to Cairo to join Churchill's regiment, the 4th Hussars.

Arriving in Italy in 1944, he recounts the campaign as the Allies push north. The tone of the diaries varies wildly: often witty, sometimes outrageous but also poignant and philosophical.

The voice and attitudes are entertainingly dated, but are delivered with warmth, a charming turn of phrase and a keen eye for the absurd.