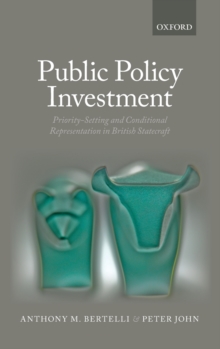 This book addresses one of the enduring questions of democratic government: why do governments choose some public policies but not others?

Despite an extensive literature, it has proven surprisingly hard to explain policy prioritisation.

To remedy this gap, this book offers a new approach called public policyinvestment: governments enhance their chances of getting re-elected by managing a portfolio of public policies and paying attention to the risks involved.

In this way, government is like an investor making choices about risk to yield returns on its investments of political capital.

The public providessignals about expected political capital returns for government policies, or policy assets, that can be captured through expressed opinion in public polls.

Governments can anticipate these signals in the choices they make.

Statecraft is the ability political leaders have to consider risk and return in their policy portfolios and do so amidst uncertainty in the public's policy valuation.

Such actions represent the public's views conditionally because not every opinion change is a price signal. It then outlines a quantitative method for measuring risk and return, applying it to the case of Britain between 1971 and 2000 and offers case studies illustrating statecraft by prime ministers, such as Edward Heath or Margaret Thatcher.

The book challenges comparative scholars to apply public policyinvestment to countries that have separation of powers, multiparty government, and decentralization.