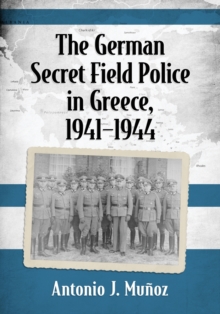 The Geheime Feldpolizei (Secret Field Police) was the political police of the German Army during World War Two.

Its members were drawn from both the regular German police, including detectives, as well as personnel from various Nazi security organizations.

The mission of the GFP was numerous: protecting important political and military leaders, investigating black market activities, as well as acts of sabotage and espionage; tracking down deserters, examining anti-German activists, and hunting down partisans and partisan suspects.

An additional role of the GFP was to act as liaison between the German Army and the Nazi SS.

While performing some of these duties, members of the GFP eventually involved themselves directly in criminal activities.

The GFP committed numerous crimes to both the Jewish community and the general population of Greece.

Its leadership cadre was composed of dedicated Nazis and in one instance, included a former concentration camp commander!

As the war progressed, their crimes in Greece increased in intensity and volume.

The behavior of the GFP in Greece was a combination of the manner in which they operated in the West and East.