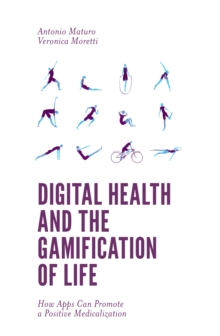 Digital Health and the Gamification of Life : How Apps Can Promote a Positive Medicalization Hardback

This book analyses the role of technology in the realm of health.

Health apps can promote medicalization and the idea that health is an individual matter, rather than a political and social one. The authors base their arguments around three theoretical frameworks.

Quantification: the growing importance in our society of markers, rankings, and scores, which thanks to digital devices is fueled by the ease with which it is now possible to collect data.

Gamification: a powerful trend in digital society, using playful features to transform what are seen as dull tasks into competitive and appealing ones.

Gamified self-tracking seemingly increases our productivity without oppressing us with apparent self-governance.

Finally, Medicalization: a growing social phenomenon of the transformation of a 'normal' condition into something pathological.

Several health apps presuppose a conception of the user as an individualized subject divorced from any social determinants of health.

The authors investigate the possibility of people sharing their most private states leading to new forms of algorithmic surveillance. Alongside this negative vision of medicalization the authors recover the now-rare concept of positive medicalization, looking at how apps can work as positive self-help devices though promoting a medical framework.

A selection of digital programs related to fitness in the workplace are also presented and discussed.

Digital Health and the Gamification of...