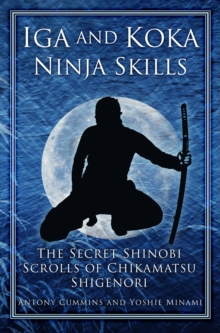 `A retainer of our domain, Renpeido Chikamatsu Hikonoshin Shigenori, each morning washed his face and hands, dressed himself in Hakama and prayed in front of the kamidana alter ...His prayer was thus: "Please afford me success in war." He kept to this routine all through his life.' Through patient and scholarly detective work, Antony Cummins and the Historical Ninjutsu Research Team have unearthed a Shinobi treasure.

The eighteenth-century military historian Chikamatsu recorded the oral traditions of the Ninja and passed on those skills in lectures he gave at his Renpeido school of war in Owari domain during the early 1700s.

Chikamatsu wrote specifically about the Shinobi of Iga and Koka, regions from which warriors were hired all over the land in the days of war.

The lost scrolls are filled with unknown Shinobi teachings, skills that include infiltration, assassination, explosives, magic and commando tactics, including an in-depth commentary on Sun Tzu's famous 13th chapter, `The Use of Spies', in The Art of War.