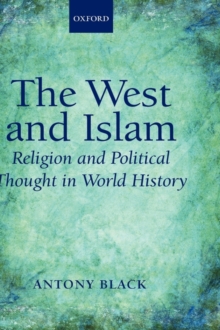 The West and Islam : Religion and Political Thought in World History Hardback

by Antony (Professor Emeritus in the History of Political Thought, School of Humanities, Univers Black

This comparative history of political thought examines what the Western and Islamic approaches to politics had in common and where they diverged.

The book considers how various ancient and medieval thought-patterns did or did not lead to modern developments; and how sacred monarchy, the legitimacy of the state, and the role of the people were looked upon in each culture.

The author focuses on the period from the rise of Islam to the European Reformation, but hisanalysis extends to the main genres of political thought up to the present.

He argues that until the mid-eleventh century, Europe, Islam, and the Byzantine world had more in common than is commonly thought.

What made the West different was the papal revolution of the late eleventh century, Europe'stwelfth-century 'renaissance', and the gradual secularization of political thought which followed.

At the same time, Islam, after an early blossoming, interpreted its own revelation more and more narrowly.

This volume throws light on why the West and Islam each developed their own particular kind of approach to government, politics and the state, and on why these are so different.