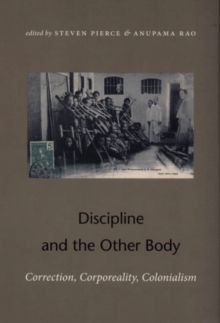 Discipline and the Other Body : Correction, Corporeality, Colonialism Hardback

Discipline and the Other Body reveals the intimate relationship between violence and difference underlying modern governmental power and the human rights discourses that critique it.

The comparative essays brought together in this collection show how, in using physical violence to discipline and control colonial subjects, governments repeatedly found themselves enmeshed in a fundamental paradox: Colonialism was about the management of difference-the "civilized" ruling the "uncivilized"-but colonial violence seemed to many the antithesis of civility, threatening to undermine the very distinction that validated its use.

Violation of the bodies of colonial subjects regularly generated scandals, and eventually led to humanitarian initiatives, ultimately changing conceptions of "the human" and helping to constitute modern forms of human rights discourse.

Colonial violence and discipline also played a crucial role in hardening modern categories of difference-race, gender, ethnicity, sexuality, and religion.The contributors, who include both historians and anthropologists, address instances of colonial violence from the early modern period to the twentieth century and from Asia to Africa to North America.

They consider diverse topics, from the interactions of race, law, and violence in colonial Louisiana to British attempts to regulate sex and marriage in the Indian army in the early nineteenth century.

They examine the political dilemmas raised by the extensive use of torture in colonial India and the ways that British colonizers flogged Nigerians based on beliefs that different ethnic and religious affiliations corresponded to different degrees of social evolution and levels of susceptibility to physical pain.

An essay on how contemporary Sufi healers deploy bodily violence to maintain sexual and religious hierarchies in postcolonial northern Nigeria makes it clear that the state is not the only enforcer of disciplinary regimes based on ideas of difference. Contributors. Laura Bear, Yvette Christianse, Shannon Lee Dawdy, Dorothy Ko, Isaac Land, Susan O'Brien, Douglas M.