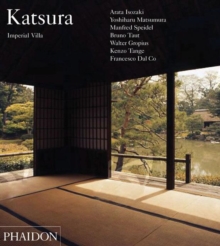 This book presents a detailed history of Katsura, the seventeenth-century Imperial Palace in Kyoto, a pivotal work of Japanese architecture often described as the 'quintessence of Japanese taste'.

First revealed to the modern architectural world by the German architect Bruno Taut in the early twentieth-century, Katsura stunned and then excited the architectural community of the West.

Le Corbusier and Walter Gropius, pillars of the Modernist establishment, were fascinated by Katsura's 'modernity'.

They saw in it orthogonal and modular spaces, devoid of decoration, clear parallels to contemporary Modernism, going so far as to proclaim Katsura a 'historical' example of modernity.