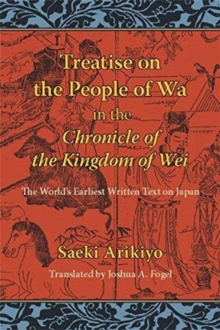 Reading the ""Treatise on the People of Wa"" in The Chronicle of the Kingdom of Wei : The World's Earliest Written Text on Japan Hardback

The Treatise on the People of Wa, which appears in the Chronicle of Wei, is the oldest written text that we have about that place now known as Japan. Just over 2,000 characters in length, it was to set the tone for subsequent writing on Japan for centuries. A work by Chinese who never visited Japan and based on evidence much older, it often describes events and customs now difficult to understand or properly place historically. It has produced thousands of books and articles in Japanese over the years, trying to decipher the text. Saeki Arikiyo takes a straightforward philological approach, analyzing the text character by character in comparison to countless other early texts, inscriptional materials, and other media in an effort to explain the meaning of the text in its time-and to demonstrate that the text gives a fairly accurate picture of the ancestors of the Japanese people. 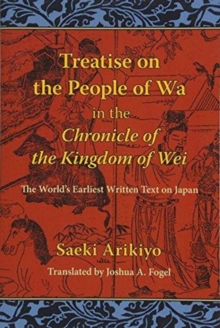 Reading the ""Treatise on the People of...