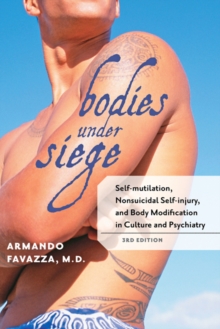 A quarter century after it was first published, Bodies under Siege remains the classic, authoritative book on self-mutilation.

Now in its third edition, this invaluable work is updated throughout with findings from hundreds of new studies, discussions of new models of self-injury, an assessment of the S.A.F.E. (Self Abuse Finally Ends) program, and the Bill of Rights for People Who Self-harm.

Armando Favazza's pioneering work identified a wide range of forces, many of them cultural and societal, that compel or impel people to mutilate themselves.

This new edition examines the explosive growth in the incidence of self-injurious behaviors and body modification practices.