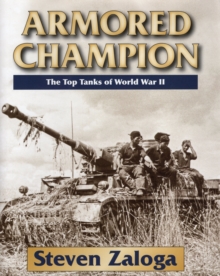 What was the best tank of World War II? The Soviet T-34? The German Tiger? The American Sherman? The question of top tank has provoked and delighted historians and armor buffs ever since the muzzles went silent. But though fun to debate, the question is difficult, if not impossible, to answer in a meaningful way--because national pride and personal passions come into play, because such sweeping judgments don't account for the evolution and adaptation of doctrine and design, of tactics and technology, and often don't consider important factors such as cost and reliability. In Armored Champion Steven Zaloga breaks down the war into eight periods and evaluates the tanks that slugged it out during each.

His criteria focus on the "holy trinity" of tank design--armor, firepower, and mobility--but also include crew training, tactics, affordability, and dependability. For each time period--for example, Barbarossa in 1941, the Desert War in 1941-42, and the 1944-45 period when heavies like the King Tiger arrived--Zaloga names a "Tanker's Choice," the tank which crews might want based largely on battlefield performance, and a "Commander's Choice," the tank which senior leaders might choose based on not only technical prowess, but also quantity-versus-quality considerations and likelihood of breakdown. Sometimes the two choices are the same; often they are not. Champions include the Panzer IV and Tiger, the T-34, the Pershing, and a few surprises. Armored Champion is the product of more than forty years of research.

It relies on extensive documentation from archives, government studies, and published sources--much of which has not appeared in English before--to make fact-based assessments of the tanks that fought the Second World War. This is both a heavy-caliber blast in the top-tank argument and a stockpile of ammunition for future debate.